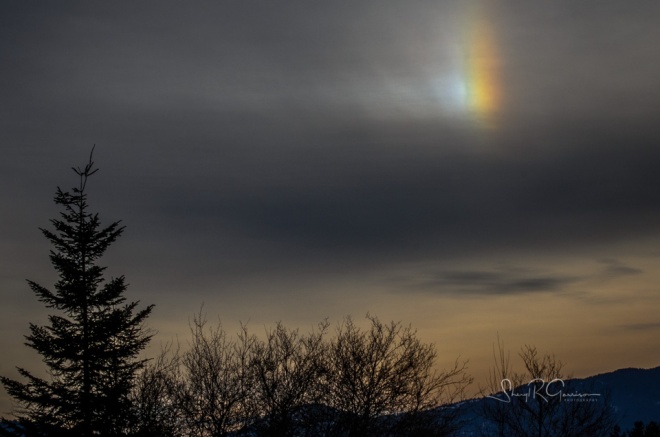 No one undertakes research in physics with the intention of winning a prize. It is the joy of discovering something no one knew before.

Or in this case, something that I did not know before.

This is an image from 4 years ago. It’s the one that began my study of halo and atmospheric phenomena.

I was driving home as the sun was beginning to go down and spotted what I thought was a patch of rainbow. I stopped to photograph it and wondered why I should be seeing it alongside the sun, about a hand span to the left of it, and not opposite to the sun where rainbows occur.

It would brighten then fade and I watched it until it disappeared altogether and the sun sank below the horizon.

I couldn’t wait to get home and research what I had seen. Little did I know at the time that this would launch in me a passion for clouds and the ice crystals that can be found in some of them.

This beautiful patch of color I discovered was created by horizontally oriented plate crystals drifting down through the sky.

This is the sundog, parhelia, or “mock sun”. Sometimes they are seen in pairs on either side of the sun and sometimes they appear along with that full circle, the 22 degree halo, around the sun.

Cirrus clouds, my most favorite cloud of all. Wispy and somewhat ethereal and chock full of ice crystals…

Photographing daily has made me more observant and at the same time more inquisitive. My camera isn’t just a tool for capturing an image. It’s the catalyst for my exploration of the natural world.

Where has your camera led you?

and was filled with great moments. 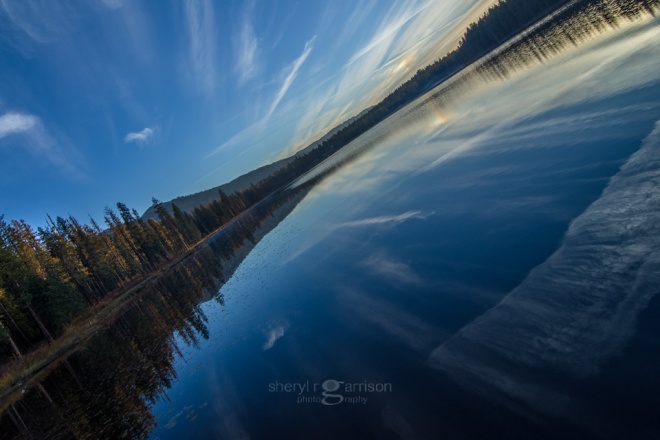 Yesterday was one of those perfect photographic days that for me was so centering.

It started out with a photo shoot of one of my absolute favorite subjects…dogs. The energy was great, the dogs exuded canine joy, and there was even a little break in the constant rain that couldn’t have been better timed.

As the sun began to sink lower on the horizon, cirrus clouds appeared and I had another treat following my theme for the day…parhelia or sundogs.

Jumping in my Jeep I headed off to see what might develop as the hexagonal ice plates drifted high in the sky, nearly horizontal to the horizon.

As I watched, a circumzenithal arc appeared above the sundogs, lasting only for a brief moment. I shot from several different angles and in today’s shot thought that I’d throw out that you don’t always have to have a straight horizon, sometimes it’s fun to deliberately tilt the camera, Dutch tilt, more often used in cinematography.

Life is about moments and today was filled with them.

Where will you find yours this week-end?