He who can no longer pause to wonder and stand rapt in awe, is as good as dead; his eyes are closed.

On a recent trip to the mountains we had the great pleasure of seeing this guy munching away amongst the wildflowers that infused the meadow with color. The bear’s sense of smell is incredible so although I was a good distance away and using a long lens, he knew I was there.

I love that I have the opportunity to be in the presence of these large apex predators. When steps are taken such as proper food storage while camping in their backyard, everyone is safer, bear included.

For me it’s a thrill to have wildlife appear in a setting that is already filled with beauty. I’ve been at this very place throughout all of the seasons and I’ve never failed to be rapt in awe.

and a thrilling email conversation with physicist Les Cowley. 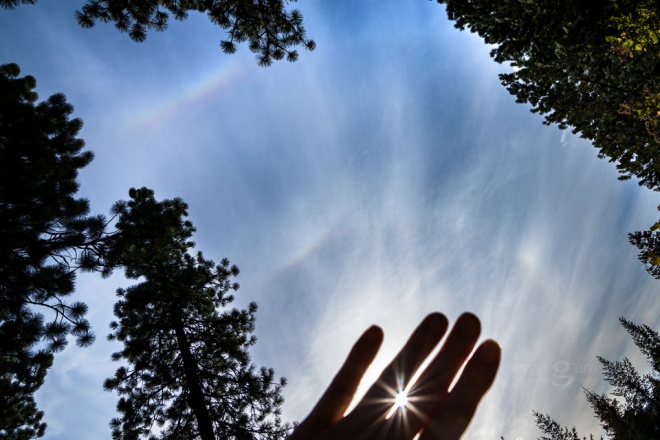 Look deep into nature, and then you will understand everything better.

Do you ever wake up and just know that something is going to happen?

Last Saturday I let the dogs out early in the morning and noted the appearance of some of my most favorite clouds…cirrus and cirrostratus. Those of you who know me well know of my love for photographing ice, snowflakes, and other crystalline structures found in the winter months so it’s only natural that these delicate clouds composed of ice crystal would draw my attention in the summer!

These clouds are the ones capable of producing atmospheric phenomena like halos, arcs, and iridescent clouds.

The first to appear was a 22 degree halo and iridescent clouds. As the day wore on and the clouds showed no signs of dissipating I started to feel excitement building that I might spot a circumzenithal arc, often called a grin in the sky as it looks like an upside down rainbow.

As the sun began to get lower in the sky I walked outside scanning all parts of the sky and discovered the appearance of a sundog. And then I saw it…circumzenithal arc! Moving quickly I tried to capture as many views as possible but couldn’t quell a nagging thought that there was also something in those images that I didn’t understand so after the last light faded I came inside to research halos on my favorite site atoptics. I came to the conclusion that the secondary arc that I was curious about might be a tangent arc but hoping for some clarification I emailed Les Cowley (atoptics), retired physicist and atmospheric optics expert.

I couldn’t have been more thrilled when I got a response back that began with congratulations, you saw two rare arcs-a supralateral and also a Parry arc. The Parry arc is named for William Edward Parry who diagramed this arc in 1820 while icebound on his search for the northwest passage.

This lovely man also took the time to provide me with an enhanced, labeled view of my image.

I’m not sure what surprised me the most, that I photographed these rare arcs or that Mr Cowley took the time to do this for me, a novice skywatcher who studies clouds and atmospherics in her spare time.

One of those days that I will remember for a very long time and as I shared with Mr Cowley, I’m afraid that you may have just created a monster!

His delightful response? Feed the monster…and I fully intend to!

If you’re interested in these ice halos I would encourage you to visit http://www.atoptics.co.uk where you will find a veritable treasure trove of information.