but did you know it could look different to the person standing beside me? 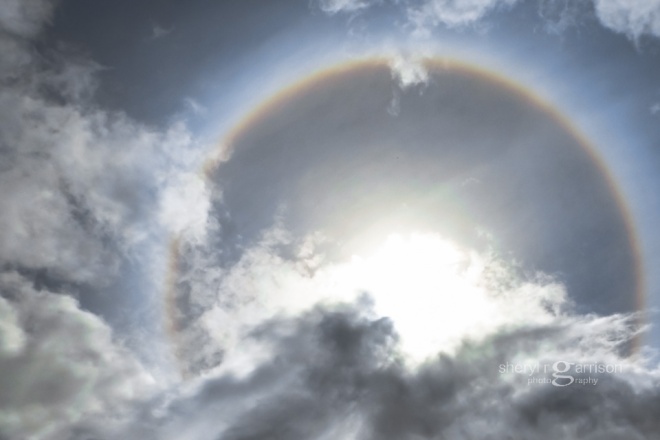 Forests, lakes, and rivers, clouds and winds, stars and flowers, stupendous glaciers and crystal snowflakes – every form of animate or inanimate existence, leaves its impress upon the soul of man.

For me it’s not just about the image. The journey does not end with the click of the shutter.

I am always on the look out for the unusual. The shots that are transient and fleeting. While out kayaking I had expectations that my shots would be water based as we skimmed along the creek accompanied by eagles and osprey soaring overhead.

They were likely the reason that I glanced up at that moment and saw the formation of this 22 degree halo around the sun. Some of the clouds were similar to the ones that created last week’s image of the iridescent clouds.

I resisted the urge to dash home and research exactly what atmospheric conditions needed to align to result in this halo formation.

I learned that the circular halo is formed by not precisely aligned but by poorly aligned hexagonal crystals. Ironic how something poorly aligned could create something so precise. The halo appears darker in the inside because the smaller angles of the crystals don’t refract the light. The angle that it is viewed from can make it appear differently to each person and just like a snowflake each one is unique. The 22 degree halo is one of the more common halos.

A couple of notes…

The images that I share are shot in raw format with my Nikons. This image was taken with a point and shoot that I borrowed from my mother as the lens that I had on my camera could capture sections of the halo in greater detail but not the entire halo. While in a kayak I often limit my gear. All images are edited in Lightroom including this one but I always stay true to the image. If the image should be a double exposure or image overlay from my camera I will so state.

Be very careful not to look directly at the sun and especially not through the lens of a camera and don’t forget to look up!