or having a plan come together!

Everything that you can imagine is real.

On this special eclipse night, the fourth eclipse in a tetra, I wanted to do something more than just photograph a large frame filling blood moon. I kept being drawn to the idea of photographing the stars AND having a full moon in the shot. It just doesn’t happen very often that you can see the full moon and not have the stars washed out by its glow. I also knew that at 8:11 there would be an iridium flare visible for a brief moment. Not a very bright one but having shot these before I hoped that it would be bright enough. Could I capture this trifecta?

A great deal of planning needed to take place. First there was scouting out a location and figuring out where each element would be at that one moment necessary to capture all three. For this I turned to a wonderful ap called Photopills. It gave me all of the tools necessary to plot the placement of the moon and the milky way in relation to the direction and elevation of the flare. Taking some test shots showed me that shooting at 11 mm on my wide angle lens should just barely squeeze these three elements into the shot. What settings I would be using needed to be decided close to the time of the shot as I really did not know how much light would be present.

The one thing that I was certain of was that I would have one shot, just one frame, to get this. The girl likes a challenge though and certainly I filled my time before and after with capturing the beauty of this extra large moon, the likes of which will not occur again until 2033, as it rose behind the mountains, already partially eclipsed.

It was a beautiful night, with perfect weather and even a shooting star that exploded during a test shot. How lucky can one girl be? Or is luck when opportunity and planning come together…you be the judge!

More images can be viewed in the gallery idaho after dark by clicking on this link to my website.

be careful what you wish for! 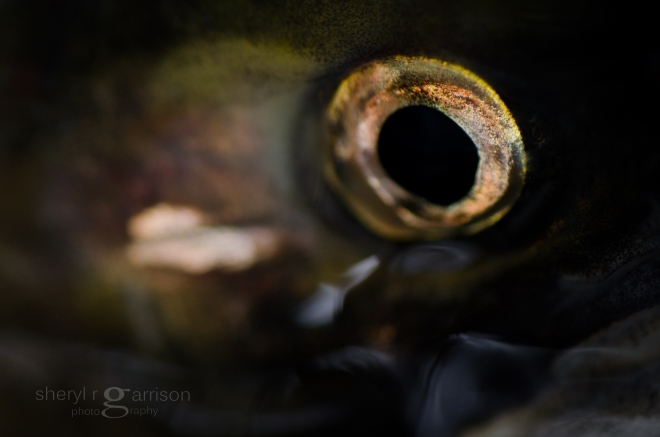 To the artist there is never anything ugly in nature.

The reality of the kokanee salmon spawn was a far different scene than I had imagined. In retrospect I suppose that I had not really thought this through. I imagined the brightly colored fish valiantly making their way up-stream to lay eggs that would hatch in the spring.

The kokanee is the landlocked version of the sockeye salmon and they spend their entire lives in fresh water. It was magical really seeing them twist and flip, powering their way upstream against a fairly strong flow of water. They glistened and shone with eye-popping color, ranging from strong pinks to deep reds but retaining the dark green head.

I wandered along the edge of the creek armed with bear spray in the event that one should make a sudden, not to be avoided appearance. The sound of the rushing water eliminated the possibility of hearing a bear in advance so I alternated taking shots with taking full scans of the area around me.

I knew that the kokanee died after spawning and there were bodies in various stages of decay beginning to gather at the edges. As I moved in to photograph one such body; tail and fins tattered and gouges scraped down through the skin and into the flesh on his sides, I watched in horror as he tried to draw a breath. It was then that I realized that this was not an isolated case. All around me were fish hanging on by a thread in bodies that barely functioned; where death would be a blessing.

And so I began to photograph them…these warriors that had conquered the arduous trip upstream to spawn. Did I set out to photograph dead and dying kokanee? Most assuredly not but I recognized that this was a moment, an opportunity that shouldn’t be dismissed, and in finding a way to create beauty amongst the carnage I was able to have some measure of peace with the reality of nature’s cycle of life. Not always pretty, not always kind, but always consistent in the eventuality of death.

Prints and additional images from this series are available in gallery idaho…finned by clicking on this link to my website .

and a moment of beauty in the dawn hours.

Silently, one by one, in the infinite meadows of heaven, blossomed the lovely stars, the forget me not of angels.

On each anniversary of September 11th I am instantly transported back to that surreal moment, watching a television display footage of the attack on the world trade center. I can remember each moment as if it were in slow motion…trying at the same time to comprehend what I was seeing. It is one of those events that never seems to lose its rawness and I feel compelled to mark its passage each year with a moment of silence.

At the time I was a member of a search and rescue team and as I watched it unfold my pager began to go off and I knew that some members of the team would be going into that massive ‘rubble pile’ in search of anyone still surviving. I knew it would not be me as I worked a bloodhound that was trained to follow only the scent of a victim that I provided to her. The dogs going in would be trained to alert on any human scent.

It was difficult to be on the sidelines waiting for any word of a positive find and at the same time being concerned for the safety and well-being of other team members and their canine partners. This many years later I still find it a challenge to articulate what happened on the days following this terror attack on American soil.

My heart goes out to the families that lost loved ones on 9-11 as well as to the first responders, handlers, and canines that later succumbed due to illnesses caused by their selfless call to duty in a toxic environment.

So I take a moment each September 11 to remember and on this morning felt some measure of solace as dawn approached on the west coast and the aurora borealis danced across the sky.

And then there were the stars…the forget me not of angels.

a difference is being felt.

It couldn’t have come at a better time during this summer of record-breaking heat and voracious forest fires. Finally the dense smoke hanging over the region has been blown out and tamped down by several bouts of rain and lowered temperatures. While containment of these massive and numerous fires has not yet been achieved there has been significant progress made towards that end.

There could not have been a more beautiful sound than hearing these droplets begin to fall on our metal roof. I am quite certain that I was not the only one to go outside, lift my face skywards and just take in a deep breath of the moisture laden air.

This image is a double taken at my little lake, sharing the rain with the beauty of the trees that did not come under fire this summer.

Are we out of the woods yet? No…but the view is getting better every day and for that I am grateful!